The specimens presented here belong to one of the first collections donated to the Tatra Museum by Tytus Chałubiński. As shown in the photographs, various types of labels can be seen directly next to the specimens. Among the items of this collection, there are also single samples collected from outside the Tatra Mountains, from other highland sites in southern Poland such as the Babia Góra massif and the Beskid hills.

The handwritten entries written on a blank piece of paper were penned by Antoni Ślósarski (1843-1897). In 1888 he was one of the founders of the Tatra Museum Society and the Tatra Museum. When he was in Zakopane, he devoted a lot of time to organizing and cataloging the Museum’s collections. He transcribed the notes of Tytus Chałubiński, called the “Geognastic List“, and thus created a notebook which became the first catalogue. He also created the first records of specimens (see below), which contain precise information about each item from the geognastic list. 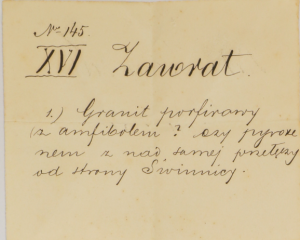 On some of the specimens, rectangular cards with a blue border and numbers have survived to this day. These numbers are consistent with the numbers in the geognostic list and were written by Tytus Chałubiński himself. 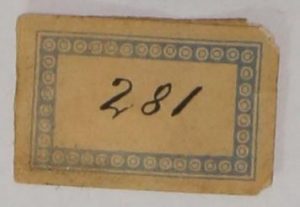 Amazingly, the original labels with entries written by the collector himself have survived to this day on some of the specimens. 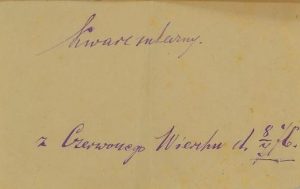 Museum labels (circa 1890) written by Józef Mrozewicz, a geologist who supplied the Tatra Museum with rock specimens and organized its first geological exhibition. In 1922, the Tatra Museum Society appointed him its honorary member. The first records, made in 1889, contain a detailed description of the site where the specimen was found. The corrections were probably made by Mrozewicz himself. 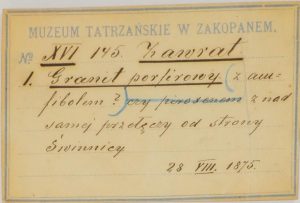 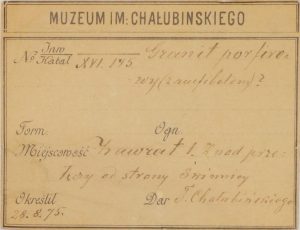 Some of the exhibits also feature small, characteristic pieces of cardboard with red borders, which were made by Mieczysław Limanowski for the needs of the 9th International Geological Congress, which took place in Vienna in 1903.

Selected exhibits are also accompanied with the visiting cards of Bronisław Znatowicz along with information about the number of tests performed on a given specimen. Znatowicz was a chemist and an outstanding promoter of natural sciences, a friend of Tytus Chałubiński, a member of the editorial board of Wszechświat [the Universe]. He ran an independent chemical laboratory. He studied the composition of water from the Vistula river, rocks and soils from the Tatras. He also carried out research in phosphorescence, the electrolysis of organic compounds, the reduction and nitration of aromatic compounds, and the separation of dyes from coal tar. 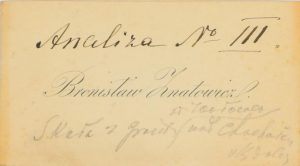 It is often forgotten that apart from the herbarium of mosses, Tytus Chałubiński also donated a herbarium of vascular plants to the Tatra Museum. This collection consists of 416 herbarium cards containing plants collected in the Tatra Mountains. In this part you will be able to see specially made scans of this collection. This bookmark also included a fragment of the archival catalogue.

Due to the virtual nature of this exhibition, it is possible for the first time to present visible images contained in microscopic preparations prepared by Tytus Chałubiński himself. This collection along with the herbarium of mosses, vascular plants and geological specimens was one of the first collections of the Tatra Museum.

he scale is clearly marked on each photo, and the description on the slide is documented in a description on a separate slide. The microscopic preparations of mosses (B / 20 / MT) are in excellent condition. They are placed in six book-shaped boxes. Boxes nos. 1 to 5 in a black, cardboard binding, 19.5 x 20.0 x 6.5 cm in size, each contain 100 compartments, which are lined with paper and velvet. The latin title “MUSCI TATRENSES preparata“ is embossed in gold in latin on the spine. Book No. 6, 18.0 x 26.5 x 6.5 cm, bound in brown and beige linen, has the German inscription “Microscopische Präparate” embossed in gold on its spine. Each preparation is described by Tytus Chałubiński. In addition, an inventory number (e.g. 3459) was written in pencil on each museum label. 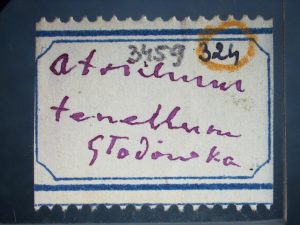 The first inspection of microscopic specimens was performed in 1911 by Mr. Rottert (probably Władysław Karol Rothert). He highly rated the state of preservation of these specimens, according to the notes made at that time by the then curator Walenty Sztaszel. 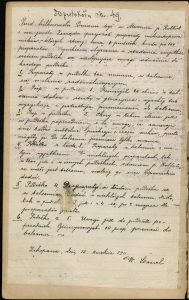