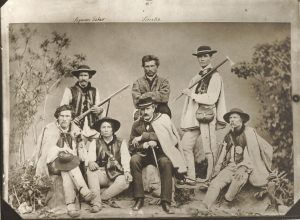 Photograph – In the centre, Tytus Chałubiński; from the left is Szymon Tatar the elder; next to him Józef Sieczka and Jan Alfons Surzycki. Sitting from left to right, Józef Śliwa, Wojciech Roj and Maciej Sieczka, circa 1875.

The mountain expeditions organized by Tytus Chałubiński have remained legendary to this day. One such trip was described by Dr. Chałubiński himself in his only novel entitled Six Days in the Tatras: An Expedition Without an Itinerary. Many stories, legends and scientific publications have also been written about these trips. One of the most famous excursions of this type was Tytus Chałubiński’s trip together with Belgian parliamentarians in the summer of 1882. One of them was Charles Buls, mayor of Brussels and his friend the president of the Belgian Chamber of Deputies, Auguste Couvreur. The expedition was also accompanied by the famous artist Wojciech Kossak, who readily describes these expeditions in his written memoirs (1912). This expedition took place on August 1-3, 1882, and another on August 13-15, 1882, which set out from the house of Antoni Kocyan, in Oravice.